50 years after being internationally banned (as part of the sweeping 1970 controlled drug and substances act) psychedelic substances like LSD, MDMA, and psilocybin are undergoing a resurgence of interest on the part of individuals and institutions alike. Researchers at highly accredited institutions in both Canada and the U.S. (like the newly opened University of Toronto's psychedelic study department) are conducting scientifically rigorous studies on the safety and efficacy of these substances in treating a host of psychological conditions, including but not limited to depression, addictions, anxiety, PTSD, OCD, Alzheimers, and eating disorders. The results of these studies have so far been overwhelmingly positive, particularly for psilocybin, prompting the FDA in the U.S. to designate it as a "breakthrough therapy" for Major Depressive Disorder, a type of recurring depression that is resistant to treatment and affects 300 million worldwide.

This research has also found that psilocybin has the potential to significantly benefit the psychologically healthy user. One study at Yale university found that it provided sustained improvement in mood, social proclivity, and even positive changes in moral values like open-mindedness, empathy, and generosity. Another study at Toronto based MAPS (The Multidisciplinary Association for Psychedelic Studies) focused on psilocybin's addiction-breaking qualities, and found that 80% of study subjects had successfully abstained from smoking when interviewed at a 6-month follow up. Yet another study at Johns Hopkins University found that 83% of participants rated their psilocybin experience during the study as one of the top 5 most meaningful experiences of their lives! 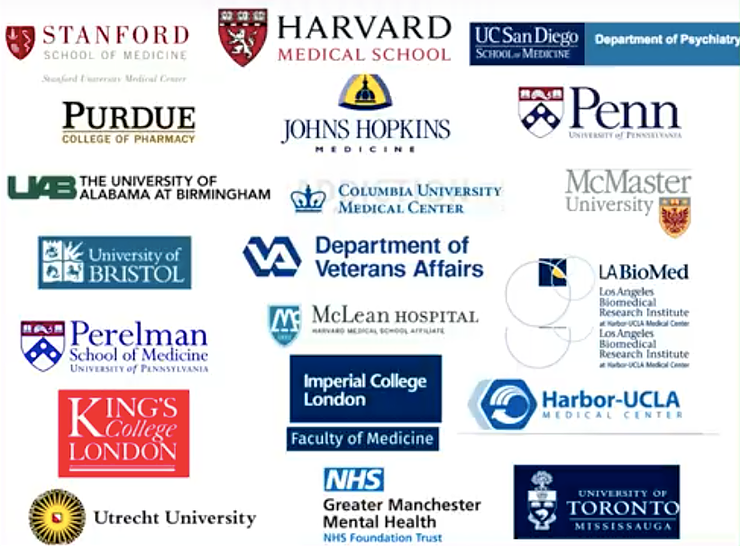 *some of the universities currently studying psilocybin

This growing body of evidence, along with the production of multiple documentary films (like DOSED, Fantastic Fungi, and The Mind Explained) that purport the benefits of psilocybin have caused an explosion in popularity around the topic of psychedelics, and shifted the sentiment of both law enforcement and governing bodies towards acceptance. It has also catalyzed over 100 legislative reform movements in localities across North America, notably Denver, Chicago, and Oakland (who have all decriminalized psilocybin mushrooms for personal use). This shift in sentiment is also taking place in Canadian cities like Vancouver, who's city council recently blocked a motion to prevent the sale of psilocybin mushrooms & are set to allow Dana Larsen to open a micro-dose dispensary storefront in February 2020. Activists across the nation are appealing to both local authorities and directly to Health Canada in widely varied fashions, some in a strictly legal sense (like Thera-psil), and some (like Dana Larsen) openly engaged in civil disobedience.

The organization spearheading the push for legally prescribed mushrooms is called Thera-Psil, a team of 7 therapists led by Dr. Bruce Tobin. They have applied numerous times to Health Canada for a special exception to produce psilocybin for patients, and plan to take the matter to court if their proposals are rejected. Senior criminal defence attorney John Convoy thinks the case will follow the precedent set by the 2000 R. v. Parker case, the landmark legal battle that first invalidated cannabis prohibition, and laid the groundwork for federal legalization in 2017. This case cited section 55(1) of the controlled substances act, arguing that Cannabis prohibition was unconstitutional on the grounds that patients with severe conditions had their rights to life and liberty compromised by not being allowed to access Cannabis. Tobin believes the same argument can be made for psilocybin, and it can be applied to a much broader range of conditions. He estimates that there are several thousand Canadian who could benefit from legally prescribed psilocybin, including terminal cancer patients and those with severe treatment resistant depression and PTSD. While he thinks patients should have access to psilocybin, Tobin has declared that the does not support decriminalization for recreational purposes, and intends to remain focused on its legalization (or exemption for Thera-Psil) for medical purposes, staying "squeaky clean" from a legal perspective.

*excerpt from the Canadian controlled drugs and substances act

The renowned Vancouver pot-activist Dana Larsen, famous for mailing pot seeds to anyone who was willing receive them during the days of prohibition, is taking a markedly different approach. He is perhaps the only psychedelic activist that is openly and loudly broadcasting his business offering psilocybin micro-doses (1/10th of a hallucinogenic dose) to patients who can provide proof of a psilocybin-treatable illness. Larsen is breaking the law, albeit an unjust law, however he believes that his position is legally defensible, and declared that he is not afraid to go to court over it. He states he would simply provide proof that he has only sold to those with medical conditions, and rely on the cannabis precedents (like R. v. Parker) for legal immunity. The progression from the legalization and de-stigmatization of cannabis to similar policies and public sentiment around psychedelics is a natural one, according to Larsen, who also believes that his civil disobedience regarding cannabis played a crucial role in its eventual legalization, and hopes to have the same outcome for psilocybin.

While Larsen's position is more vulnerable than that of Dr. Tobin, psilocybin has been remarkably low priority for law enforcement country-wide. This laize-affair attitude on the part of the authorities has spurred many to create websites similar to Larsen’s Medicinal Mushroom dispensary. Most of these grey-market websites are not limited to micro-doses but offer psilocybin in the form of dried mushrooms, tea, chocolates, candies, and liquid extracts. What is extraordinary is that so far these vendors have not been able to meet the demand for psilocybin, and are often sold out, showing just how interested the average Canadian is in both stepping away from traditional pharmaceutical treatments and using psilocybin to improve their mood and raise self-awareness. A few of these websites have received cease-and-desist letters from Health Canada, who demanded that they immediately halt the sale of substances covered by the controlled drugs and substances act, but did not take further action (as far as we know).

One theory on why online psilocybin vendors have mostly been left alone is that Police departments across the country have been swamped by fallout from the opioid crisis, and forced to effectively triage enforcement priorities and the distribution of their resources to respond to this epidemic. They understandably have chosen to focus on criminal organizations that profit from the production and distribution of hard drugs like heroin, methamphetamine, and fentanyl. It is also possible that law enforcement have factored two additional elements into their decision, first that there is consistent legitimate research coming out concerning psilocybin, and second that both the Liberal and NDP parties have announced progressive reforms to their platforms on drug policy and legality. Both parties have proposed a decriminalization of all illicit substances that would follow a structure similar to that of Portugal, which decriminalized all drugs in 2001 and saw drastic decreases in crime, HIV infection, and drug-use rates.

This burgeoning psilocybin market is growing at a rate exponentially faster than cannabis, fuelled by the increasing demand of Canadians for this substance that boasts a broader range of therapeutic applications than cannabis, and has more quantifiable positive effects on the psychological state of the recreational user. The sector is also rapidly gaining corporate capitalistic interest (which further increases psilocybins legitimacy from the perspective of government). Financial experts in many fields have seen the potential of this substance to treat conditions that affect a significant portion of the population and are prepared to capitalize on its commercialization. There are multiple publicly traded Canadian companies pursuing the research and production of psilocybin as a treatment or therapy, like Yield growth corp, Compass Pathways, Field Trip Ventures, and Mind Medicine Inc, and it is beginning to circulate throughout investment communities that psychedelics are the next area that will generate exponential returns. It is only fitting that a substance like psilocybin which offers, from a financial standpoint, excellent ROI in terms of frequency of dosage (time invested) to positive psychological effect (return on time invested), also offers serious financial potential.