Psilocybin is a naturally occurring psychoactive compound that is synthesized by over 200 mushrooms of the Psilocybe (pronounced sil-ohh-si-bee) genus. It’s not clear why these mushrooms have evolved to produce a compound that closely imitates a crucial human neurotransmitter (serotonin). One theory suggests it is a fungal defence mechanism, as psilocybin also alters the behaviour and appetite of insects, while another postulates that these mushrooms were introduced to the earth by alien beings to expedite human evolution. Psilocybin belongs to a class of drugs often referred to as hallucinogens or entheogens, humans use of these mind altering substances stretches back farther than civilization itself! With the earliest evidence found in Southeast Algeria dating to 9,000 years ago (1). Tribal peoples all around the world from Mesoamerica to Southeast Asia revered these mushrooms for the profound insights and intense feelings of euphoria, love, and connectedness that they felt after ingesting them. However it wasn’t only tribal hunter gatherers who utilized psilocybin, philosophically and scientifically advanced ancient civilizations like the Greeks had secretive cults (2) who brewed psychedelic teas and used them to induce a boost of creativity and enlightening epiphanies.

When scientifically rigorous protocols are used to study psilocybin the findings are often consistent with the teachings of ancient shamans, that the compound can drastically and sustainably improve many aspects of mental health. It has been studied (with extremely promising results) at numerous prestigious institutions (like Harvard, Stanford, and Yale) to determine its safety and efficacy in treating debilitating psychological conditions, including but not limited to depression (3), addictions (4), anxiety (5), PTSD (6), OCD (7), Alzheimers (8), and eating disorders (9).. Researchers at these institutions delved deep into the pharmacology behind Psilocybe mushrooms, finding that various species of the genus produce differing concentrations of many psychotropic tryptamine compounds, the most prevalent of these being psilocybin, psilocin, and baeocystin. They also found that the compound responsible for producing the mind-altering effects associated with these mushrooms is not psilocybin, but psilocin. After you eat ‘magic mushrooms’ psilocybin is dephosphorylated (the removal of a phosphorus molecule) by the liver into psilocin, whose molecular structure is highly similar to that of serotonin, one of the most important neurotransmitters in the human brain.

Psilocin is so similar to serotonin that it is able to bind with numerous serotonin receptors (specifically the 5-Hydroxytryptamine receptor group). When this bond is formed it causes drastic changes in neural chemistry, transmission and cross-network communication, primarily the increased secretion of Glutamate & Brain Derived Neutrophic Factor, dampening of the Default Mode Network, and the re-routing of information through brain networks that are not connected in the “sober” state of consciousness. These changes culminate in the stimulation of neurogenesis, synesthesia, sensory enhancement, and visual stimulation/hallucination that are associated with magic mushrooms.

Glutamate is an vital neurotransmitter that accounts for over 90% of the synaptic connections in the brain, and is involved in crucial brain functions like cognition, learning, memory, and energy acquisition.

Brain Derived Neurotrophic factor is a protein that helps to stimulate and control the process of neurogenesis, it also plays a key role in long-term memory, neural development, coordination, and the deciphering of sensory input by the brain.

The Default Mode Network is responsible for a variety of cognitive functions including day-dreaming, self-reflection, and the ability to perceive the past, present, and future. Some studies suggest that depression is linked to an overactive DMN. The theory behind this is the possibility that a highly active DMN causes us to extensively ruminate, over-analyze, and become removed from the present moment to question the past and the future. 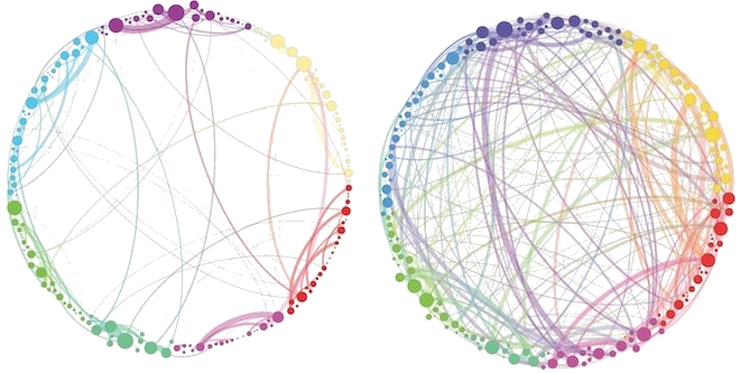 As previously stated, it has been known that ingesting mushrooms produces an enhanced state of consciousness for many millenia, however it is only recently, and in light of promising research, that the perception by authorities and institutions alike has begun to shift towards the recognition of medical benefits associated with these drugs. Three major U.S. cities (Denver, Chicago, and Oakland) have decriminalized psilocybin, while legislative motions are in progress for over 100 additional localities, meanwhile Democratic politicians Andrew Yang and Alexandria Ocasio-Cortez have both declared their support for federal policy reform around psychedelics. The FDA has also stated “we have never seen such a powerful drug, requiring such infrequent use” and attempted to fast-track it through the clinical trial process by designating it as a “breakthrough therapy” for Major Depressive Disorder (MDD).

This re-invigourization of psychedelic drugs into public consciousness is also taking place north of the American border. Jagmeet Singh (leader of the NDP) has proposed sweeping changes to Canadian drug scheduling and legality, Vancouver city council recently blocked a motion to prevent the sale of psilocybin mushrooms, and Dana Larsen is set to open a micro-dose dispensary storefront in Vancouver in Q1 2020! All of this sentiment has been catalyzed by only a handful of studies, and there is an exponentially increasing amount of interest in the topic. We can expect many new studies corroborating positive results in the coming years

*Number of studies on psychedelic substances 1960-2016

So far this article has been markedly science focused, however there are aspects of the psychedelic experience that are not explainable by current psycho-scientific knowledge. A few examples of this are the crucial importance of set and setting, why across varied demographics psilocybin reliably induces similar spiritual and transformative, even out of body experiences, and the role that auditory stimulation plays in the experience. Your physical surroundings, for example temperature, others around you, the amount of light in your setting, the type of music you play during the experience, and your level of familiarity with these variables play a role almost as important as the dosage of the drug itself! Research at Johns Hopkins University recently confirmed that music is inexplicably intertwined with both the psychedelic experience and human neuro-chemical reward systems. They have curated a playlist, noting the tempo and arrangement of tracks, that builds into a crescendo peaking around 2 hours into the playlist (also when the effects of psilocybin peak) in an effort to assist an individual into having a truly profound experience.

Along with exogenous stimulation, your mindset and intention of what you want to get out of the experience also has the potential to drastically affect what you will feel while psilocybin is being metabolized. Personally I set intent on becoming more sociable, overcoming my somewhat introverted nature, and always have a pen and paper handy to transcribe any insights that the mushroom grants. I think about what I can do to strengthen both my relationships with others, and my own psyche against negative emotion. Sometimes the result of this pondering is challenging, and forces me to step out of my ‘comfort-zone’, however I feel that the results have been extremely vindicating, and that psychedelics have been the catalyst for immense personal growth, making me a more empathetic, generous, self-aware, and relaxed person.

To conclude, similar to consciousness itself, we understand much of the biological function underpinning a psychedelic experience (described above) but seem to lack a crucial component of why it is so metaphysical, why it can reliably induce transformative experiences that result in sustained improvement in mood and mental well-being, and how this substance (psilocybin) evolved to interact with consciousness in such a profound way. When one ingests psilocybin, the intense feelings of connectedness, love, empathy and understanding, and the realization that these emotions are antediluvian and transcend our ego’s is so strong that it can be overwhelming. You are flooded with emotion, often see geometric patterns or waves, and are able to clearly and efficiently process thoughts as if from a omniscient perspective, while your mind wanders a vastly expansive and immersive realm that can only be accessed through ingesting the wondrous compound that we call Psilocybin.

If you are looking to learn more about psilocybin, or experience its effects for yourself please don’t hesitate to contact us!